I saw a truly disturbing video about dairy cows last week and it had a really intense effect on me. I've said it before, but I am a serious animal lover and I felt so sorry for the poor cows, I decided I didn't want to be part of their continued suffering so have removed dairy from my diet.. Ok, all well and good but it is not that simple. So I've stopped having milk and yogurt and ice cream and all the obvious candidates but the fact is I'm a mum in a family of 5 fussy eaters and confirmed carnivores. How can I eat what I want to eat without having to cook 2 lots of meals all the time? And what about if there is just a wee bit of parmesan cheese involved or a dash of something? How do I deal with all this?
A while back I stopped eating meat and although it was a bit of a problem, the sum effect is that the family as a whole now eats less meat, which is great, and I've found a way to make alternatives on the days where meat is on the table, but dairy just adds another whole layer of difficulties.
Thing is, I'm already lactose intolerant,(not in a pretendy way but in an actual diagnosed by hospital type of way, just saying) so really my body does not want or need this stuff, gotta keep strong, gotta avoid the dairy...I just felt like I needed wee moan there. 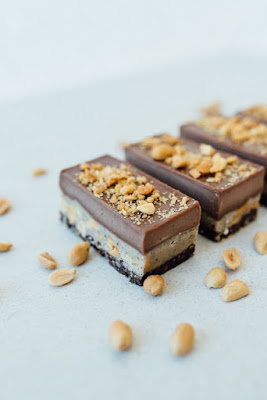 I was pleasantly surprised to find that there are some nice vegan cakes to be had out there in the world though... A friend of mine suggested we meet at SthlmRaw in Söder which specialises in raw food and I had a delicious vegan smoothie and little 'chocolate' thing...

Up until that point I really wondered if I could do it?
I'm still not sure that I can do it 100% but I'm not going to beat myself up over it, just going to do the best without piling on the pressure or feeling guilty.


Ok, so I didn't really mean to talk about my troubles with going dairy free, just wanted to offload a bit there... What I really wanted to talk about was this amazing substance developed by scientists called Vantablack back in 2014. It is the world's blackest substance. I remember reading about it back in the newspapers then and just kinda forgot about it but hubby reminded me the other day and I remembered thinking how extraordinary it is! I'm not going to get all sciencey on yer ass but if you do want to read more about it's amazing properties then check out this link to Science Alert and there is a video on that link too, where you can really see it's not bogus.

But just so you know what we are talking about, here is a picture of a 3D head and then the same head sprayed with this substance.. 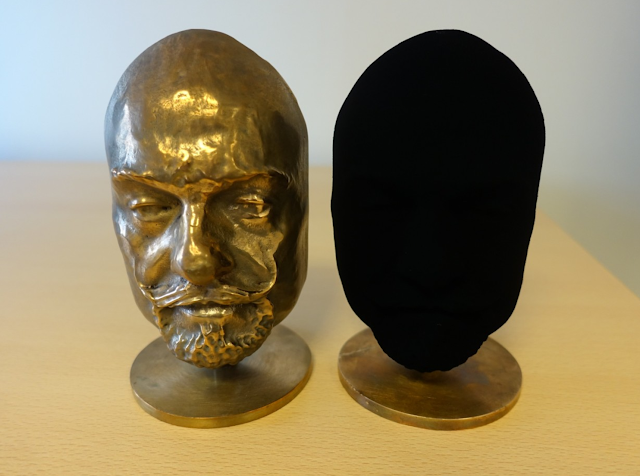 I know what you are thinking by the way! It is not photoshopped, this is genuine scientific stuff!
The long and the short of it, is that almost no light reflects off the object covered with this stuff, so effectively, you can't see it. Bonkers!

And on that note, have a wonderful weekend, and drink more water!
Posted by Unknown at 03:11 2 comments:

I visited a wonderful upholstery shop called  Stilbrott in Söder Stockholm yesterday. I was meeting with Fia, the lovely owner, and soon to be new stockist of Van Asch fabrics. 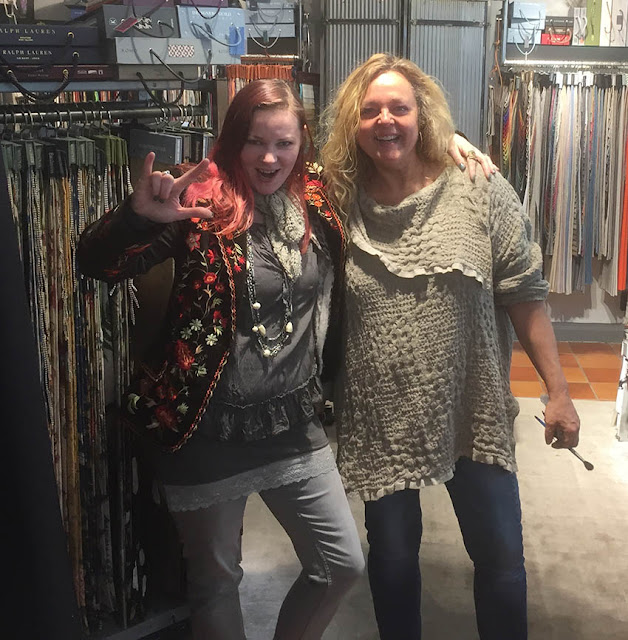 I hate having my picture taken so I often do silly faces to cover my embarrassment ... sorry about that!

Anyway, they have the most wonderful selection of fabrics, which of course, I couldn't resist snuffling around...
One of my favourites was this oriental inspired print by Lorenzo Castillo on velvet, such a fabulous crisp print and quite a bonkers design... 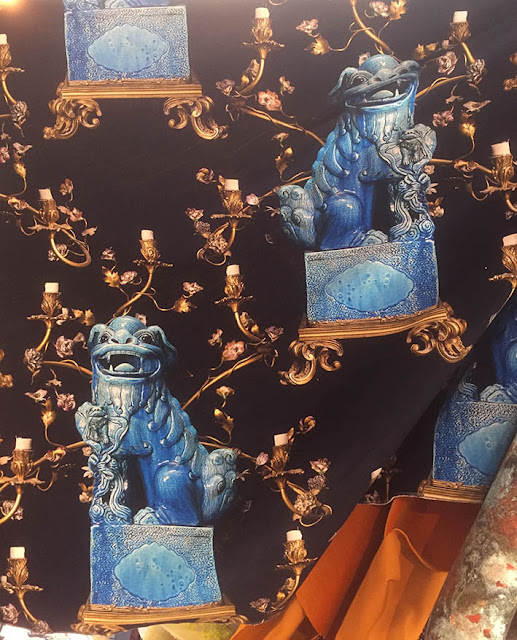 And speaking of bonkers designs, just check out the Christian Lacroix for Designers Guild collection! 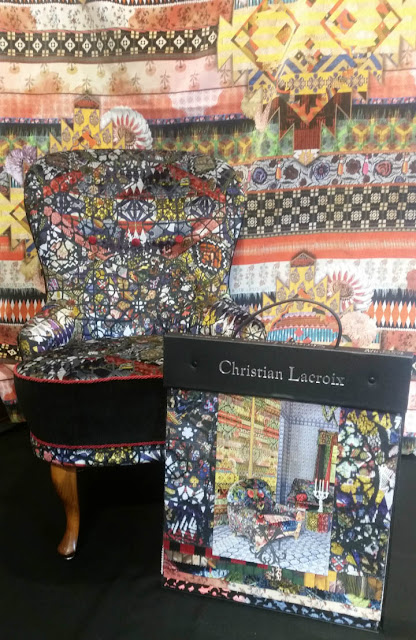 I mean check out all the busy pattern mayhem! It's just crazy 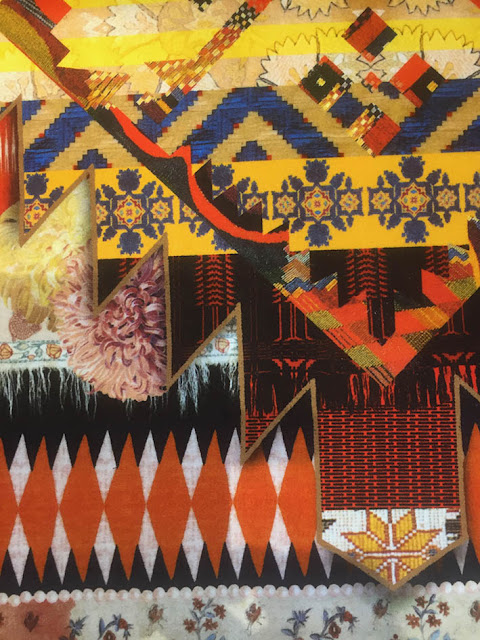 and I like pattern!  But some of these are a bit much even for me. I do love the stained glass effect fabric on the chair above though... here is a close up of it... 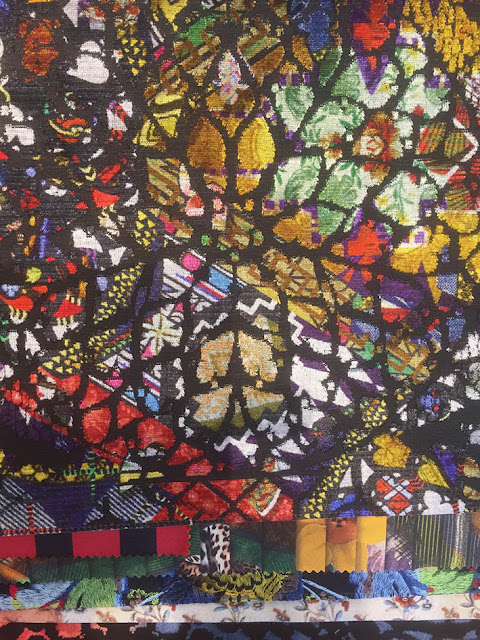 Apart from going into town to meet Fia, I've been working on the new design for my stand at Formex trade show in August. It's going to be a whole new concept and I'm super excited about it but it is a lot of work to get it ready in time... I've also been working on the new range of clothing, sampling up the forms before I do the print designs.... much to do!
Which is one of the reasons that I'm so pleased it is Friday! Oh how I love Friday! My sofa is calling to me! I'm going to have a very relaxing chill weekend and recharge, ready for my super creative next week to come...
Have a lovely weekend folks!

I thought it would be great fun to invite my wonderful crafty customers to enter into a creative challenge. I selected 8 creative people to take part and they have all been given a meter of our new Luna Gold fabric for free (a few decided to buy more to make more ambitious projects) but mostly they have only a little over a meter to work with. They can do anything they want with the fabric and I'll announce the winner on here on Friday April 7th, which is coincidentally my birthday. Actually it is no coincidence at all. I love giving things away on my birthday... The winner of this challenge gets 5 meters of various fabrics for free and I'll be featuring all the contestants pictures on here so you can see everything.
If you feel inspired to make something out of this fabric too then here is a quick link to buy it... 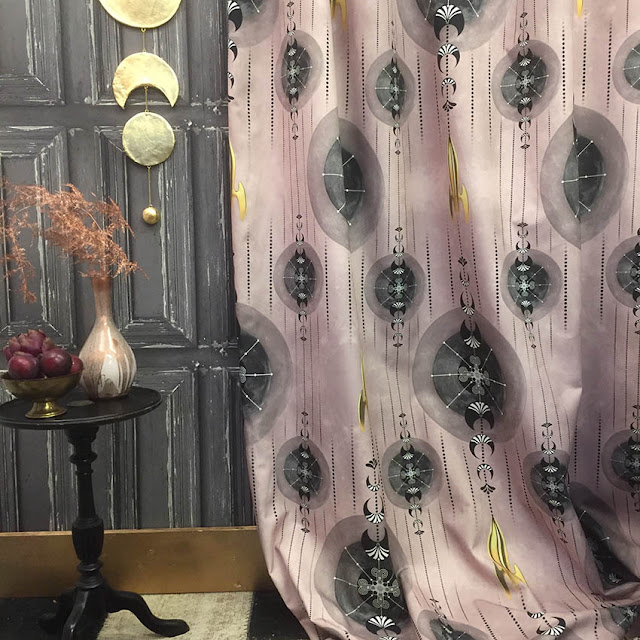 That fabulous grey panelled background is actually wallpaper and I bought it from a wonderful shop near me called Blåhuset, which leads me nicely on to tell you about the VIP party I went to last night.
Blåhuset has been selling all the best wallpaper, paints and fabrics for years but this year they have done a total refit in the store, gutted it and relaunched even more fabulous than before and  was invited to the launch party... 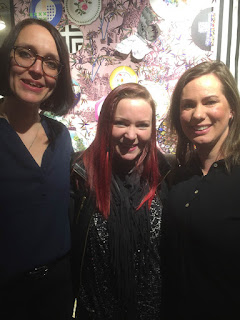 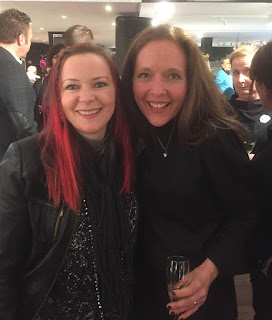 Here I am with Petra and with Charlotte and Anniken from the Blåhuset team...

I did lots of snuffling around the wallpaper section...I can't tell you how excited I get when looking at fabulous patterns! It's like my eyes are eating..don't try to imagine that...it sounds disgusting!
Just check out these beauties from Christian Lacroix... 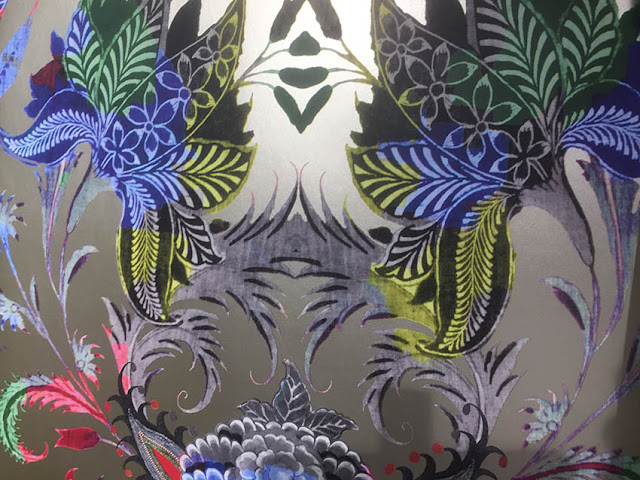 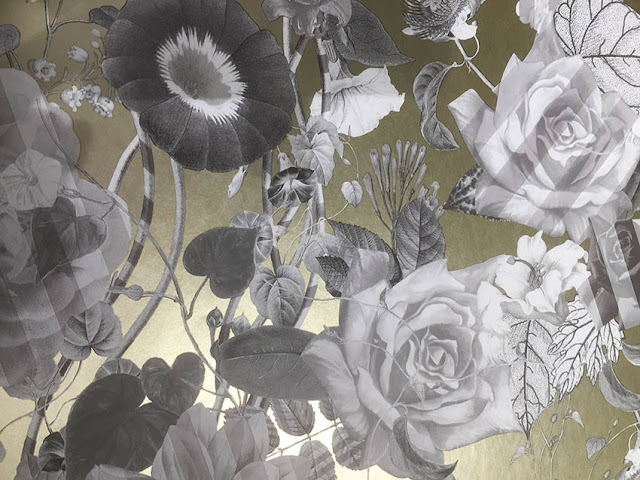 There was lots of fabulosity from Lacroix, cushions and wallpapers... 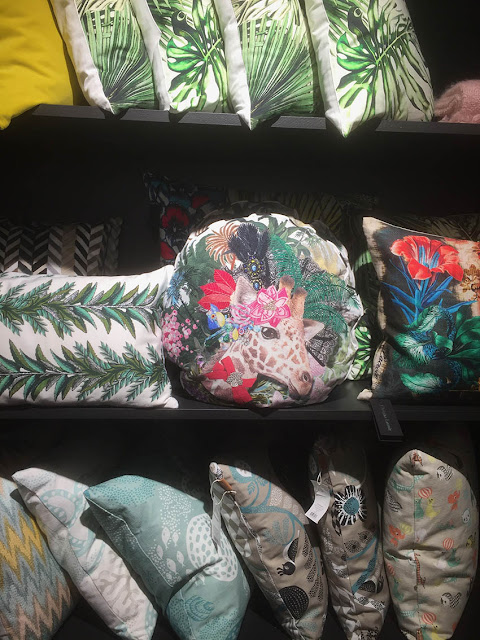 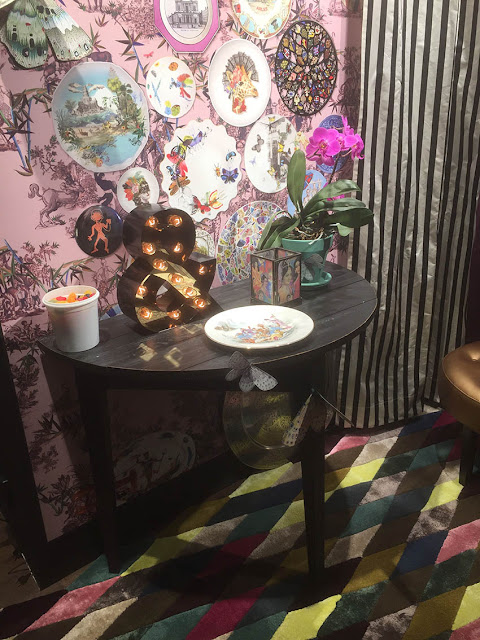 But what most struck me was how much bigger and well organised the new store is... there is still some space in there though and we are going to fill it with some Van Asch cushions! Oh yes that is going to be happening soon and I'll take some pictures and show you when they are in stock.

There are lots of gorgeous little style moments all around the store, so lots of inspiration..which you will need as the choice is overwhelming! 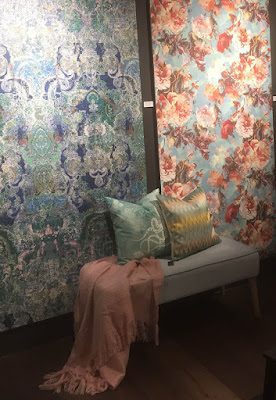 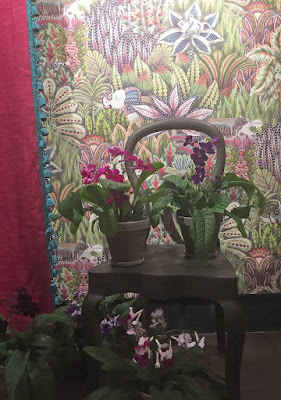 Maybe you are thinking of doing some DIY or renovations this weekend, or organising, rearranging, painting,or whatever.. well good luck with that and may the creative force be with you!
Posted by Unknown at 02:10 1 comment:

When you think of Swedish design it is all about modern minimalism, black and white, lots of wood and not a twiddly bit of nonsense in sight..well that is changing. It might take a decade to filter down into the homes of the average Swede but at the top end, the new hotels and luxury interior stores are embracing rich colour and more than a nod to the former 'Swedish Grace' style. A trend that emerged in the 1920's but was out of favour by the 30's due to the politicised idea of mass production and functionalism. Scandinavian design has been synonymous with minimalism and clean lines ever since... but things are changing. And what is really exciting is the combination of Swedish minimalism, so stylish and clean but combined with ornate and rich elements. It's all about eclectic fusion. That's just a fancy way of saying your own personal style.

Because of the internet, which I mostly hate, even though it sometimes enchants me with its shiny digital baubles...anyway, because of our unfettered access to pictures of other peoples homes, instagram, pinterest and all the rest, we see so much more possibilities, so many different ways to do things, so much more inspiration that we can cherry pick our own style.

And speaking of style I have to mention Layered at this point, a spectacularly drool worthy store in Stockholm, located in a 500 year old palace. It don't get more maximalistic than that! 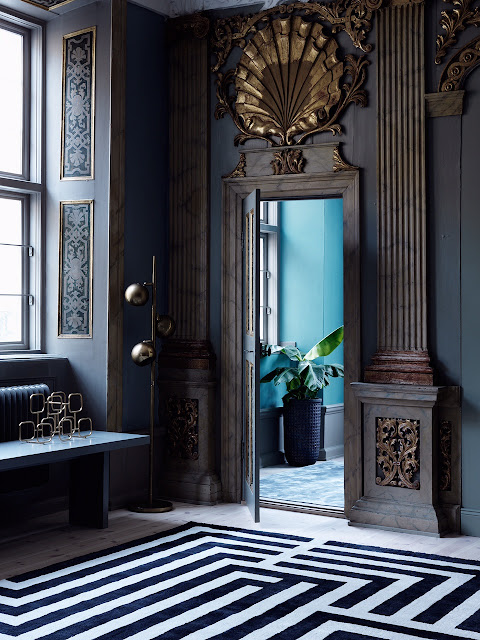 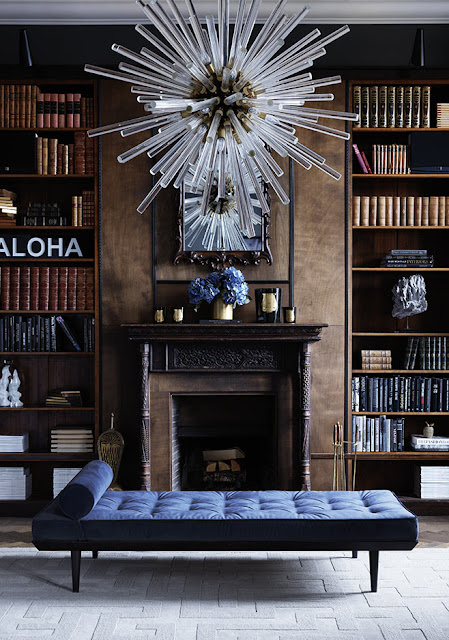 I think Swedish style will be even more stylish with the inclusion of a little more detail and the odd embellishment..And whilst we might never reinvent the interior style of Hallwyl Pallazzo  (probably a good thing as that place gave me visual indigestion..I did actually feel sick in there...true) anyway, a little bit of flounce or gold or fiddly nonsense is only a good thing. 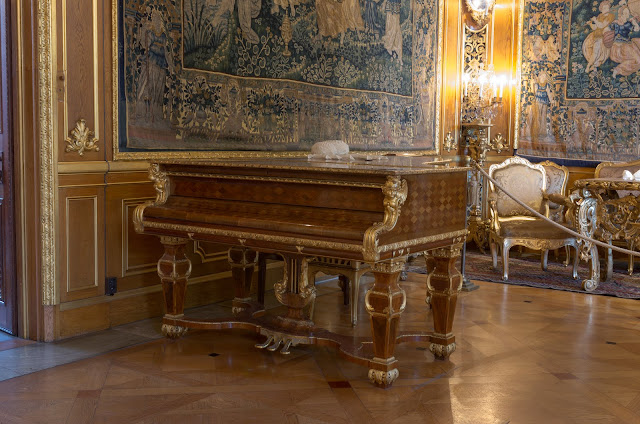 Hmmm...so I usually write a blog on a Friday afternoon, pretty much every week, and I had a great thing to write about too! I was going to talk about the rise of Swedish Maximalism...yes, it is a thing apparently. I've been reading about it. I would definitely jump on that train of possibility and ride it all the way to Truthville, because I really really do want it to be true. So, I was going to tell you all about that, and I still am, but it has to be next week. I've had no time today, been in meetings with my Spanish distributor, and Malin, who I co-design clothing with, talking about our next collection, so I've had no time to do the research necessary to talk about this new Swedish Maximalism. I even forgot to buy 'Fredagsmys'! Horror! For my non-swedish readers, Fredagsmys is a family tradition of having the whole family together on the sofa, watching TV and eating crisps and snacks on a Friday evening and roughly translates as 'Friday cozy time' but not really. I can quite honestly say that it is one of the best things I know, but I've been running around all day like a mad woman and forgot to buy aforementioned snacks... Got to dash to the store now and save Friday! The children are not amused!!!

I promise next weeks blog will be a lush and luxurious interiors indulgence.
Until then, have a wonderful Friday, I know I will!
Posted by Unknown at 08:20 No comments:

Want to get in touch?

My Time in the Mediaeval Baebes 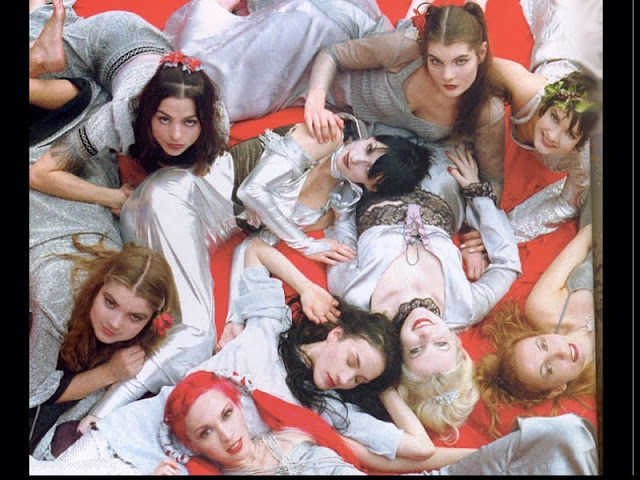 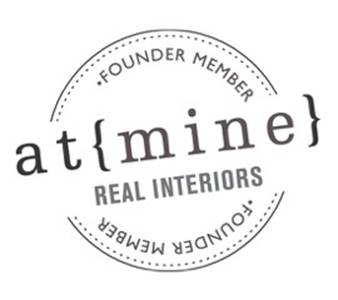